When: Saturday, August 12, 2017
Weather: Fog at home. Drove above it up the Palo Alto Road

What We Did: Hiked the 4.1 mile steep trail that began just off the Bon Jon Pass Road and took this new trail to us to the summit of Mt. Zion. Left home at 9:15 but returned to see if we could find our parking pass after getting some gas. Couldn’t find it and it was a mystery to us if we ever got a new one after last year’s trip on the Wonderland. We decided we’d chance it. It worked out. 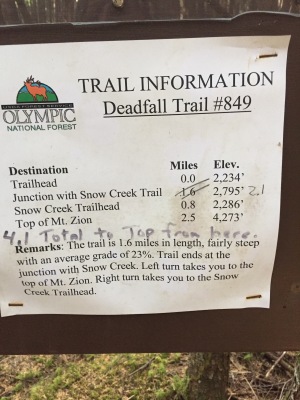 Above are the details we found at the trailhead. We’re not quite sure they are accurate.

How It Went: We did a lot of driving to not find the trailhead we were after. Totally confusing as to how you find the Gold Creek Trailhead. We tried everything we could on the east side of the Dungeness but evidently we should have used the old spur that runs down to the Dungeness crossing on the 2870 road.

The hiking part up the Deadfall was quite steep but it was a very good trail. After 2 miles, it met up with the Snow Creek Trail which we haven’t done yet. It took us only 2 1/4 hours to get to the top which is 4.1 miles and 2000 feet up. It was very nice on top where there were lots of people. A big group with a baby showed up when we were there.

At the other end of the summit there was a very cool rock that had great views of the inner Olympics. Never been there before.

We jetted down the trail and got back in an hour and 15. We drove to Ferino’s but checked out the Little Skidder Hill trailhead on the way. Still confused about where it is even after looking at several maps.

What was really good was the Mediterranean pizza and Irish Deaths we had at Ferino’s before we came home and took hot showers. It was a good day.

What’s Next
We should be heading out for our next section of the Pacific Northwest Trail on the 21st. Lake Crescent to Bogachiel State Park through Olympic National Park. Waiting for the permit now.