We are getting close to finishing Oregon. Looking back, two big parts made an impact on us – the lakes and the lava.

Crater Lake was our “jumping into Oregon” point, and began a string of volcanoes we would see. 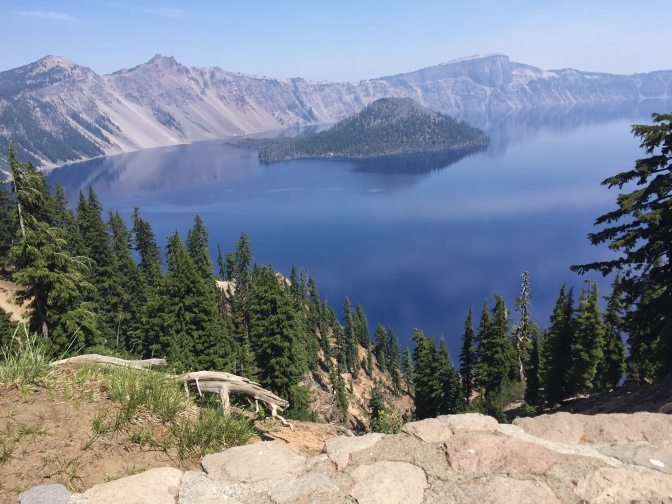 While hiking in Crater Lake Park, there were several wildfires burning. They were all in the northeast corner of the park and being managed aggressively by the park firefighters. We were lucky to have good views of the lake since the smoke was being blown away from the lake on the day we were there.

There is quite a distance of flat forests north of Crater Lake. The area was dry and hot. Not much evidence of Cascade Mountains.

As we continued north, we approached Mt Thielsen. It is a remnant volcano with only the interior plug remaining. We climbed up and around the west slopes until we came to Thielsen Creek. Our camp was situated directly under the north face in a beautiful setting. Thielsen Creek offered ice cold clear water very close by. 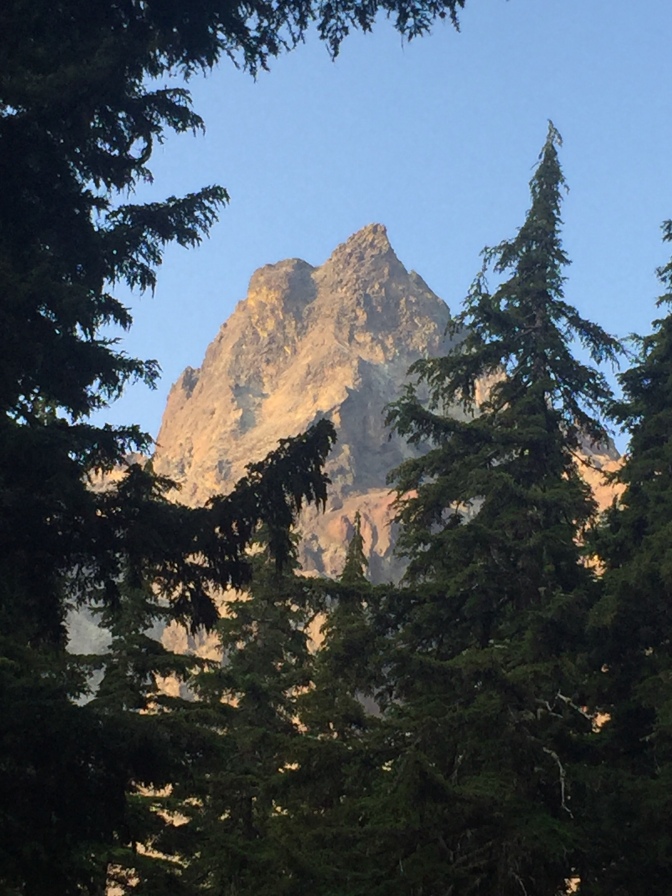 After leaving the Thielsen area, we traveled through an area of forest and innumerable ponds and small lakes. They went on and on. We camped near a road where a water cache had been placed.

Then, as we continued along the crest, the lakes and ponds increased in number and size. We then camped near a large pond that had the worst allocation of flies and mosquitoes! We also reached the high point of the Oregon-Washington part of the trail.

Fortunately, our next destination was Shelter Cove Resort on Odell Lake. It had good hiker services like laundry, great showers, and great food. Giant drink refills were only $1! We still had to camp and it cost $10 per person. Unfortunately, the resupply box we expected did not arrive at the resort but we bought a few supplies at the resort store to extend what we already were carrying.

As we continued north, the lakes just became larger and more beautiful. The trail trended northwest and traversed some interesting land. Oregon has many buttes. These seem to just be isolated hills with flat tops. Most are wooded right to the top. The PCT includes many of these buttes as part of the crest.

The trail also took us to the west of The Three Sisters. They are each dormant volcanoes over 10,000 feet. We

enjoyed the clear cold streams that ran through our camps as they flowed down from the high slopes.

We arrived at Big Lake Youth Camp for our next resupply. It is a very welcoming place where teens come for a summer experience. It is run by the Seventh Day Adventist Church. They were super helpful and generous. There was no charge for any services or food but they gladly accepted donations.

After Big Lake, we entered an area of extensive historic volcanic activity. Three-Fingered Jack occupied the northern skyline. It is a very steep, rocky peak. As we headed in that direction we crossed and climbed through several lava flows. Some of the flows look very recent although they occurred 1500 to 3000 years ago. These flows came from the Belknap complex of cinder cones and smaller shield volcanoes. The land is very rough and difficult to walk through.

Leaving the Mount Jefferson region, we crossed 23 miles of the Warm Springs Reservation as the trail took us towards Mt Hood. We did take a short side trip to Little Crater Lake. It’s not a volcanic feature but an amazing site. Several springs have forced their way to the surface and have dissolved the overlying siltstone. The lake, or pool, is 45 ft deep and is filled with the most clear blue water you can imagine. It’s like you could see a penny clearly lying on the bottom from the surface.

Our final camp before Mt Hood was next to a small but plentiful spring with clear, cold water.

The next day we got up at our early 4am time to hike to Timberline Lodge. The 14 miles went pretty fast until the trail became thick sand. We would not be denied and we powered through so we could sit and have a well-deserved beer. It was completely satisfying to sit in the historic Timberline Lodge as we awaited the arrival of Elaine’s sister and brother-in-law. We had a great lunch with them as we enjoyed seeing family for the first time in 4 months.

It also meant that we had reached the location of our next zero day to rest and resupply.

6 thoughts on “Oregon: Lakes and Lava”